The most reliable car brands according to carVertical

A vehicle that breaks down often makes for a frustrated owner. Lateness, embarrassment, and repair costs can turn your life into a nightmare. Reliability constitutes a quality you should seek in a used car. So, what are the most reliable car brands? Next, you’ll find car reliability rankings according to carVertical, to help you make an informed decision. But first, let’s briefly explain the process.

How was car reliability evaluated? 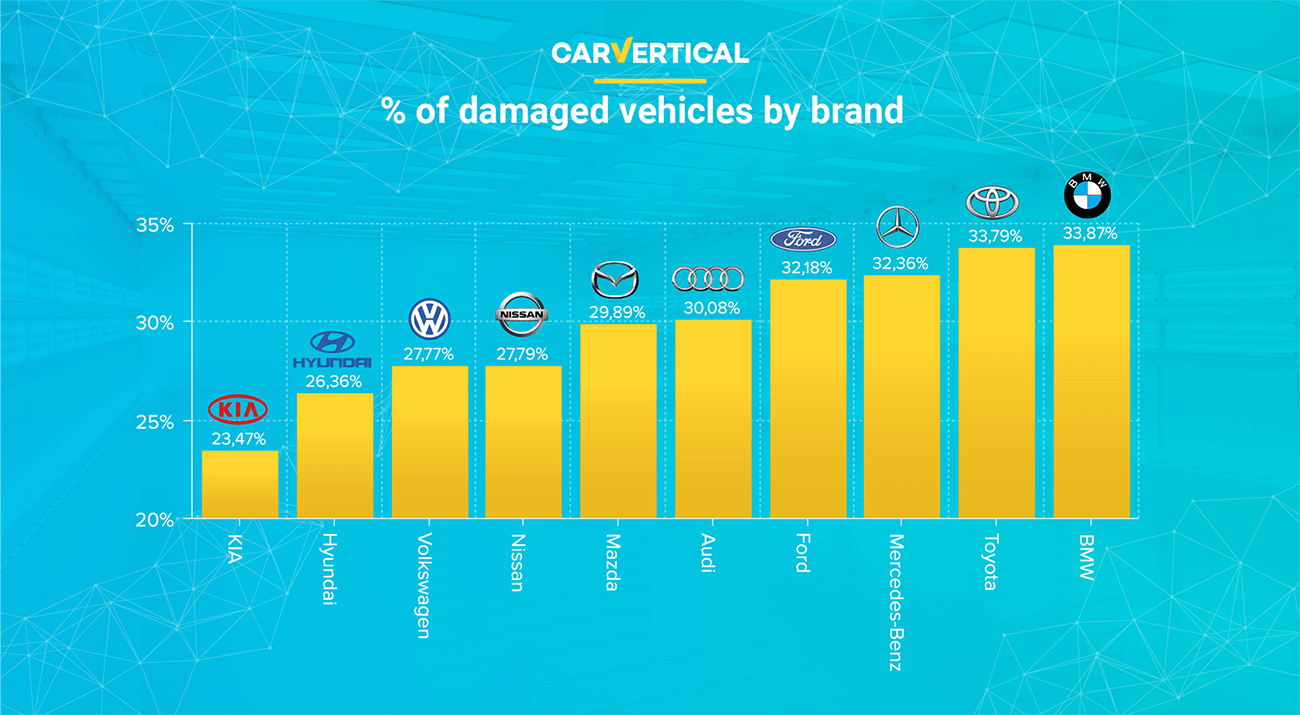 We’ve compiled the most reliable car brands list using a telling criterion - damage.The findings are based on carVertical’s vehicle history reports. The used car rankings you’re about to see are derived from each brand’s percentage of damaged cars from the total number of analysed brand cars. Let’s get started with the list of the most reliable used car brands.

Kia’s slogan "The power to surprise" certainly lived up to the hype. Even with more than 1.4 million vehicles produce every year, the South Korean automaker takes the number one spot with only 23,47% of all analyzed models being damaged.

But the most reliable brand of car isn’t flawless, and its vehicles are prone to:

Why such a good car reliability ranking? Well, Hyundai is the only motor company that manufactures its own ultra-high strength steel. The automaker also makes the Genesis, one of the safest cars in the world.

German for "The people’s car", Volkswagen produced the legendary beetle, a 20th-century icon that sold more than 21.5 million units. The automotive manufacturer ranks third among carVertical’s most reliable car brands, showing damage to 27,27% of all analyzed models.

Nissan was the world’s largest electric vehicle manufacturer for a long time before Tesla took the world by storm. With space rockets among their past creations, the Japanese automobile manufacturer racked up damage to 27,79% of all analyzed models.

But as durable as they are, Nissan vehicles are vulnerable to multiple issues:

After starting as a cork manufacturing business, the Japanese company adapted the first automotive miller cycle engine, an engine meant for ships, power plants, and locomotives. Mazda sustained damage to 29,89% of all analyzed models according to carVertical’s database.

Most commonly, the brand’s vehicles are susceptible to:

Latin for "Listen", a translation of its founder’s surname, Audi has a reputation for luxury and performance, even as a used car. Before its acquisition by the Volkswagen Group, Audi once teamed up with three other brands to form Auto Union GT. The logo’s four rings symbolize that merger.

Audi missed 5th place by a tiny margin with 30,08% of all analyzed models receiving damage.

The automotive company’s cars show a tendency for the following failures:

Strangely, Audi has a long history with safety, conducting its first crash test more than 80 years ago. Nowadays, the German automaker’s cars come with some of the most advanced active, passive, and driver-assistance safety systems.

The automotive company’s founder, Henry Ford, shaped the automotive industry of today by inventing the revolutionary "moving assembly line", which reduced car production time from 700 to an incredible 90 minutes. Therefore, it’s baffling that the well-known car manufacturer ranks so low, but carVertical’s data shows damage to 32,18% of all analyzed Ford models.

The American automaker has long stressed the importance of driver, occupant, and vehicle safety. A prime example of that is Ford’s Safety Canopy System, which deploys curtain airbags in the event of a side or rollover accident.

The renowned German automaker introduced what’s regarded as the first gasoline-powered automobile in 1886. Whether brand new or a second-hand, a Mercedes-Benz car conjures up luxury, however, a whopping 32,36% of all analyzed Mercedes-Benz were damaged according to carVertical.

Despite their remarkable quality, the Mercs suffer from a few common issues:

But the brand with "The best or nothing" slogan has pioneered automotive design, technology, and innovation. From the early versions of ABS to Pre-Safe, Mercedes-Benz engineers have introduced several safety features that are now commonplace in the industry.

The Japanese automotive company produces more than 10 million vehicles per year. The company also makes the Toyota Corolla, the best-selling car in the world with more than 40 million units sold worldwide. Shockingly, 33,79% of all Toyota models analyzed were damaged.

Despite its ranking, Japan’s largest automaker started conducting crash tests since the 1960s. More recently, it introduced the second generation of Toyota Safety Sense, a suite of active safety technologies capable of detecting pedestrians at night and cyclists during the day.

The Bavarian automaker started as an aircraft engine manufacturer. After the end of WW I, though, it switched to producing motor vehicles, and it’s now the world’s leading premium car company. A mere 0,09% earned BMW the lowest car reliability ranking instead of Toyota. The Bavarian motor company had damage to 33,87% of all models analyzed.

Second-hand beamers have their shortcomings:

By the way when buying a used BMW you can check the car’s history with our bmw vin decoder.

Are reliable used cars bought the most? 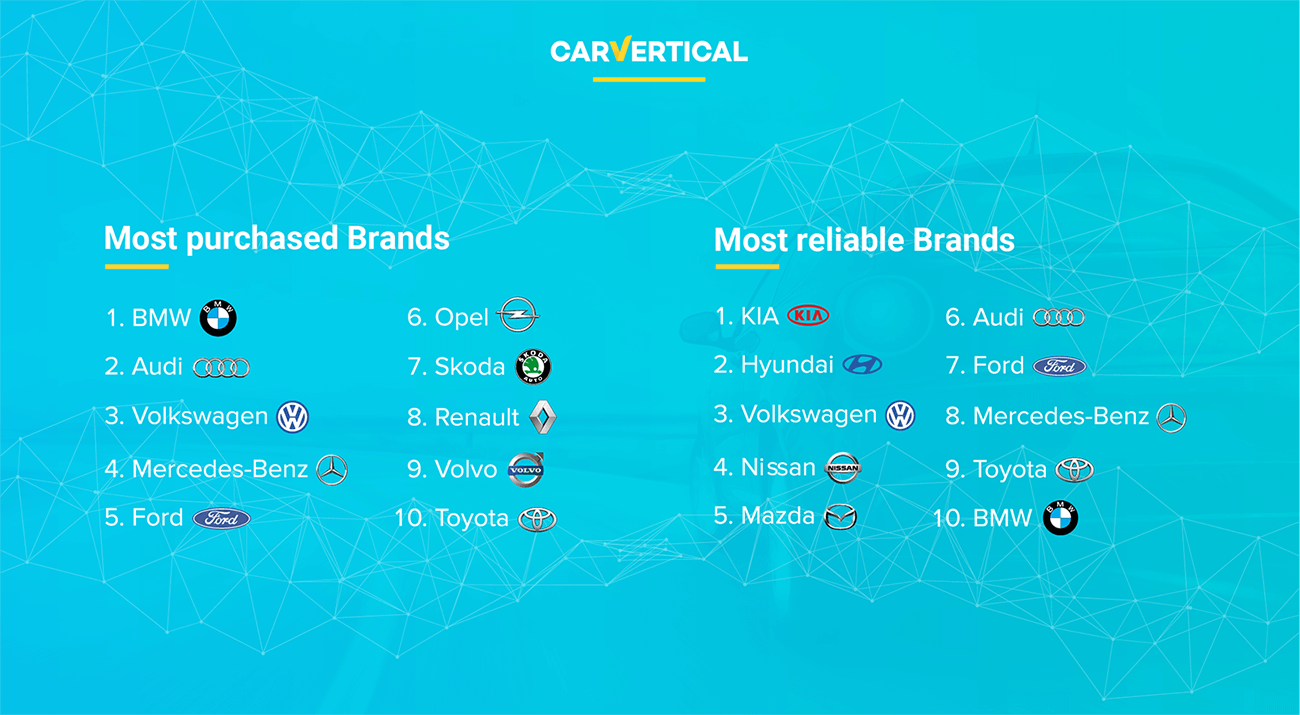 Evidently, the most reliable brands are not in-demand when buying a used car. Most people avoid them like the plague. Except for Volkswagen, the Top 5 most reliable car brands are nowhere to be found among the most purchased brands. Wondering why? Well, the most purchased brands are a few of the largest, oldest automotive manufacturers in the world. They’ve poured millions into advertising, marketing, and building an alluring image of their cars. People start to make favorable associations with the vehicle they see in films, TV, and the internet. It’s often the brand that sells, not the product.

Is the second-hand market of used cars reliable? 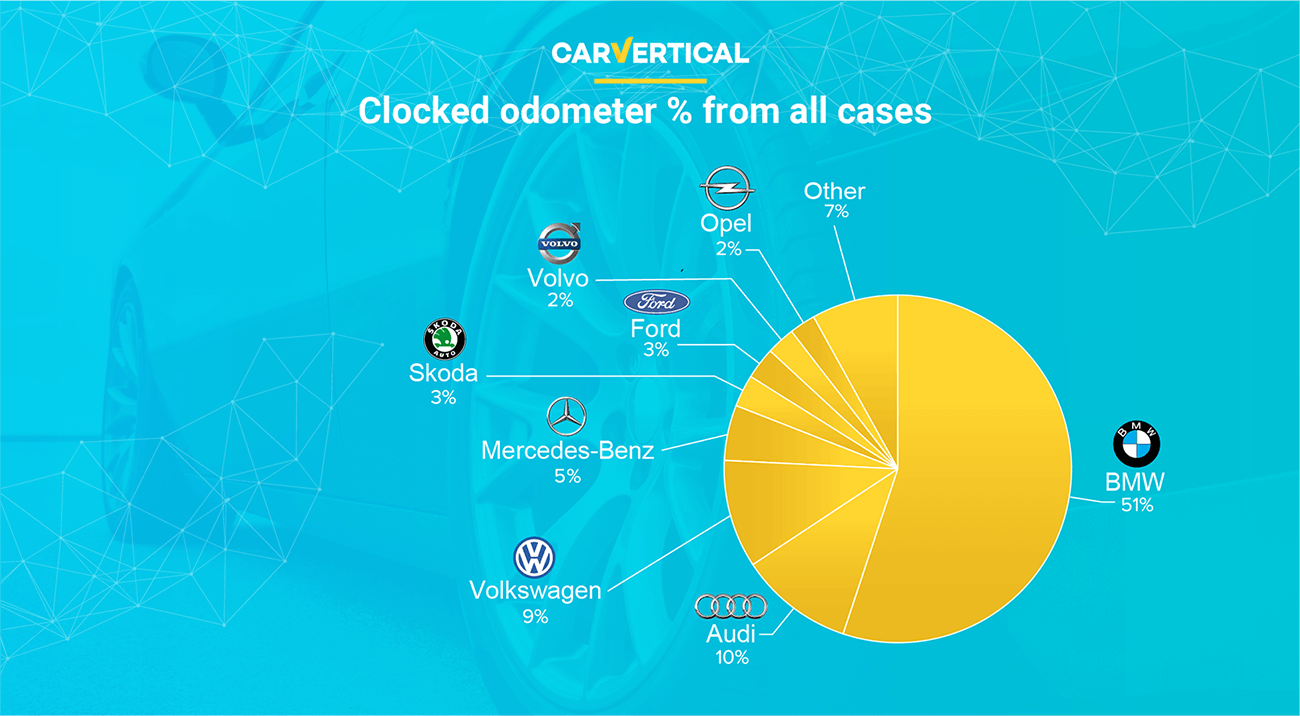 The second-hand market of used cars is a minefield for a potential buyer, especially due to mileage rollback. Mileage rollback, also known as "Clocking" or odometer fraud, is an illegal tactic some sellers use to make vehicles appear to have lower mileage by rolling back odometers. As you can glean from the graph above, the most purchased brands suffer from the most mileage rollbacks with used BMW cars totaling more than half the cases. Odometer fraud allows the seller to unjustly ask for a higher price, which means potentially scamming buyers into paying extra for a car in a poor condition. Not only that, but they could face thousands of dollars in repairs down the road.

Undoubtedly, the brands that have a reputation for reliability are anything but reliable, yet their cars are in high demand. Sadly, the most reliable car brands aren’t so popular. If you’re planning on buying a used car, do yourself a favor and get a vehicle history report before you pay thousands for a lousy ride.