The most clocked cars revealed by carVertical

When it comes to buying a used car it is usually a tricky process. Many drivers look for the best compromise. The ideal car is both affordable and as new as possible. The general state of the car is often described by mileage. But this is often forgotten or just overlooked. It can result in buyers spending much more than the car is actually worth if the mileage is clocked.

Why is it important to check a car’s mileage before buying?

Every manufactured vehicle has an odometer that shows how many miles or kilometers that specific car has covered in its lifetime. The odometer reading reflects the wear and tear of each car. Yet, mileage is often clocked and that leads to unpredictable running costs. A car can go from being a bargain to a financial disaster in a matter of seconds. For example, a car with a 100 000 miles or kilometers rollback can be unpredictable and highly costly to maintain. It will also be undesirable when it comes to selling it again in the future.

carVertical, the company that checks car history by VIN, carried out research to find out which cars are most commonly clocked. The data was gathered from carVertical’s own extensive database. The list showed the percentage of clocked cars by model - based on all the car models analyzed.

There have been over half of million reports analyzed over the last 12 months (October 2019 to October 2020). carVertical collected data from different markets all over the world including: Poland, Romania, Hungary, France, Slovenia, Slovakia, Czech Republic, Latvia, Bulgaria, Ukraine, Serbia, Germany, Croatia, Russia, and the United States of America.

Here is the list of the most commonly clocked car models. Used car buyers should check the mileage online before proceeding with a transaction. 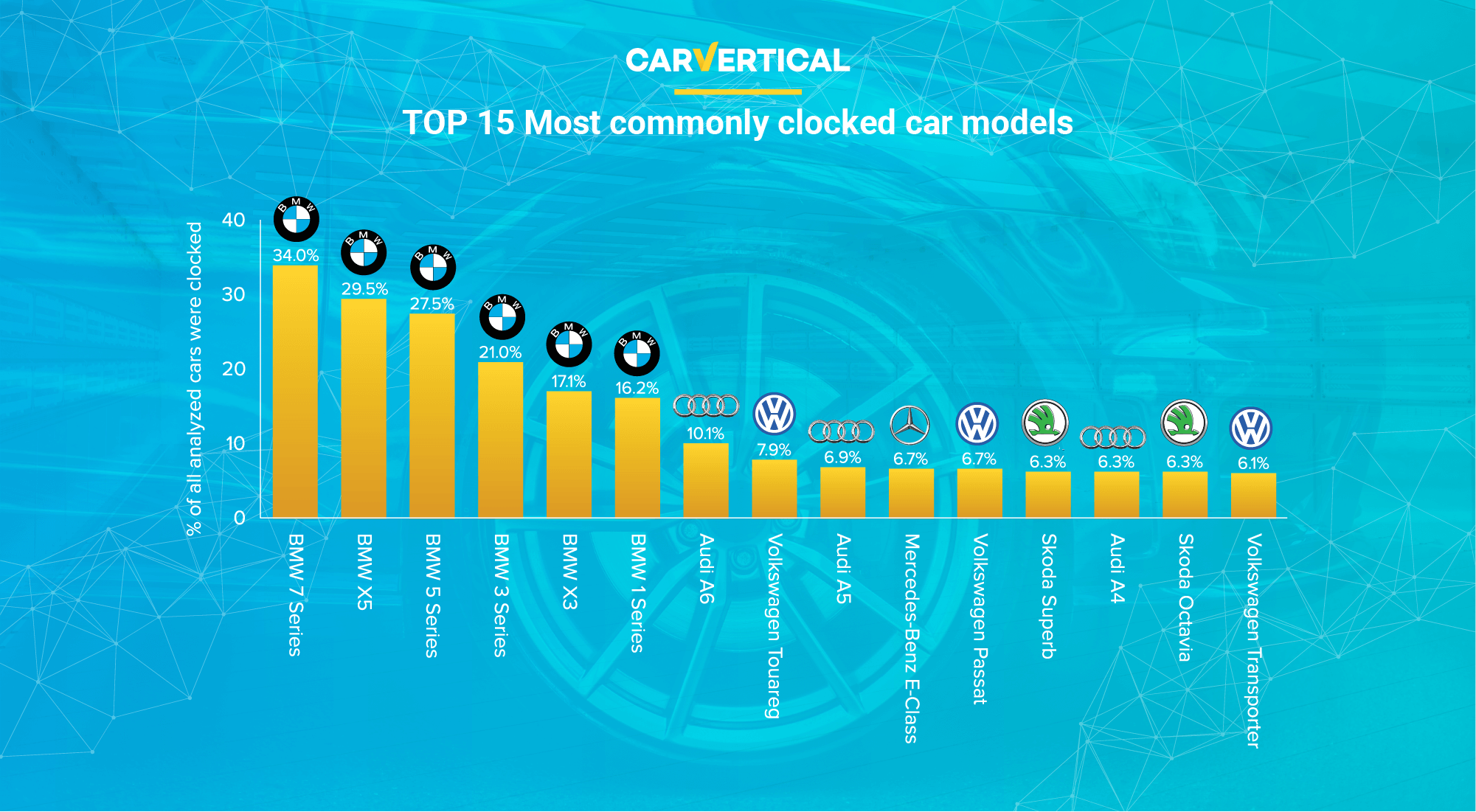 The following results reveal German cars are amongst the most regularly clocked vehicles. Another interesting observation is the segmentation of cars. Premium segment cars are much more often clocked than Economy class cars. The luxurious BMW 7 series and X5 cars are the most likely to be clocked by unscrupulous dealers. Buyers of luxury cars can be hit by big financial problems if the car they bought has been targeted by mileage fraud.

One of the key factors of a car’s mileage is age. Older cars tend to be clocked more often. The study revealed that most rolled back Premium vehicles are older than economy class cars. 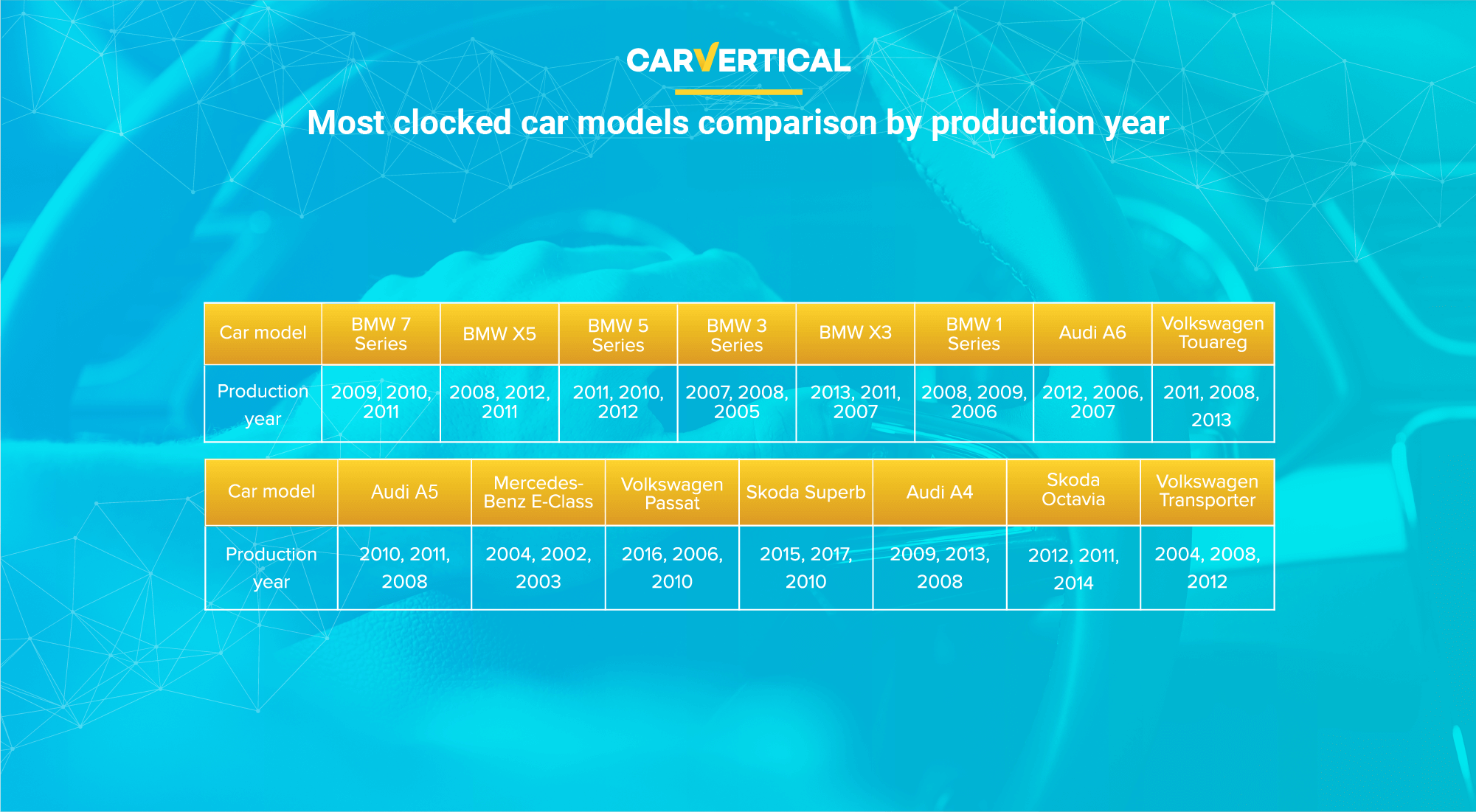 As the data shows, older Premium class cars are most affected by mileage fraud. Most popular BMWs are clocked when they are between 10 and 15 years old. The Mercedes-Benz E class models usually see odometer rollback for the 2002-2004 year models. That is an older choice for fraudulent car dealers.

Clocked Economy class cars are marginally newer. The data for Volkswagen Passat, Skoda Superb, and Skoda Octavia models show that these cars are most commonly clocked during their first decade on the road.

Diesel vehicles are designed to cover much greater distances and that leads to a greater clocked car ratio. It is very common to see vehicles imported from western European countries after they cover more than 300 000 miles/kilometers. With an odometer rolled back, the value of these cars can be increased by a big margin. 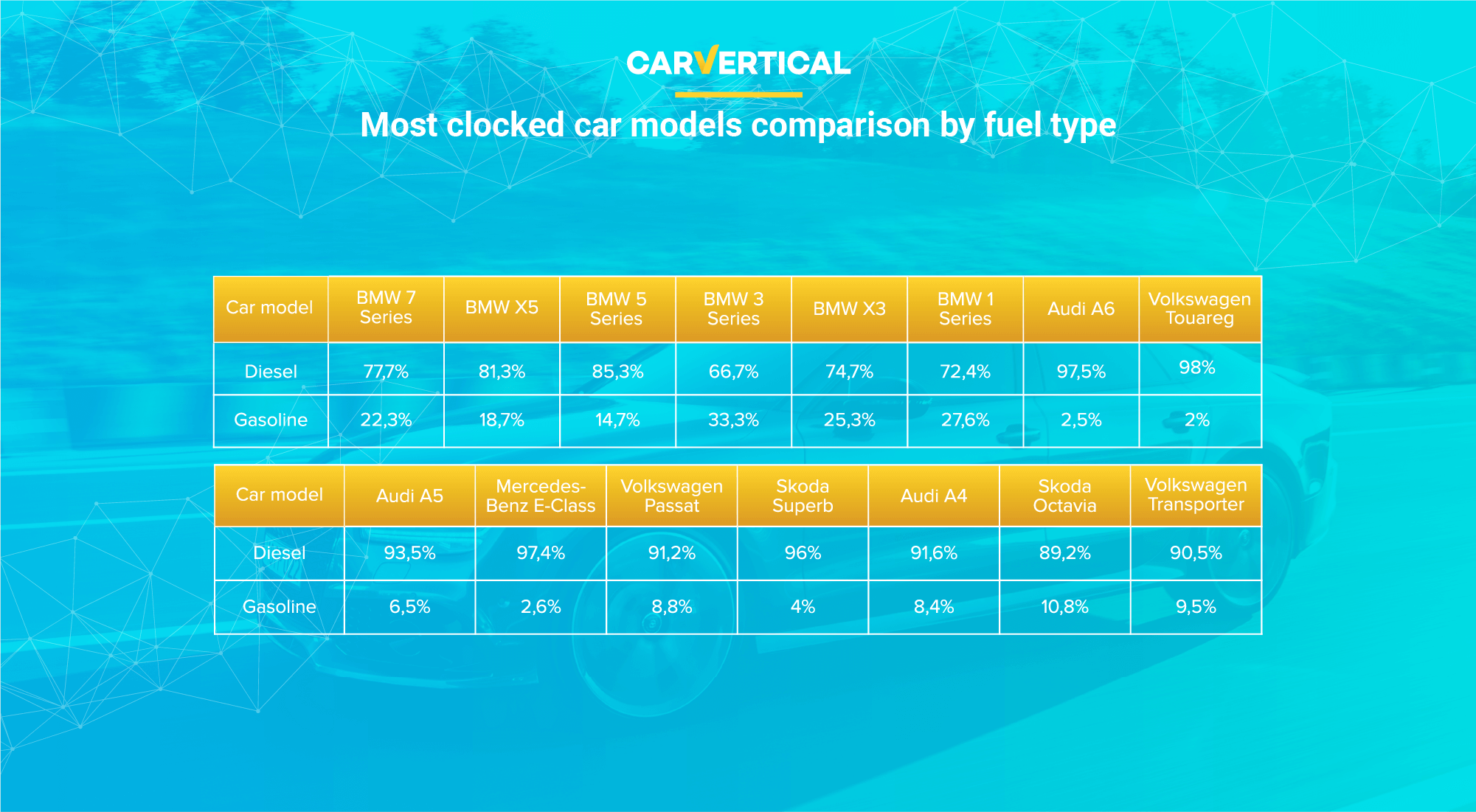 The data showing clocked cars by fuel type reflects the specific selection of cars in Central-Eastern Europe. Drivers in Western countries are selling vehicles with high mileage and expensive maintenance. These cars with faked odometer readings usually land in countries towards the East of Europe.

Some cars, like the Audi A6, Volkswagen Touareg, and Mercedes-Benz E-Class are almost all diesels. There is only a few percent of clocked petrol variants. The massive gap between different types of fuel means that there is a lower risk of getting a petrol-powered car with clocked mileage.

The most common mileage fraud can be spotted in Central-Eastern Europe. Countries towards the West suffer less from the odometer rollback problem. 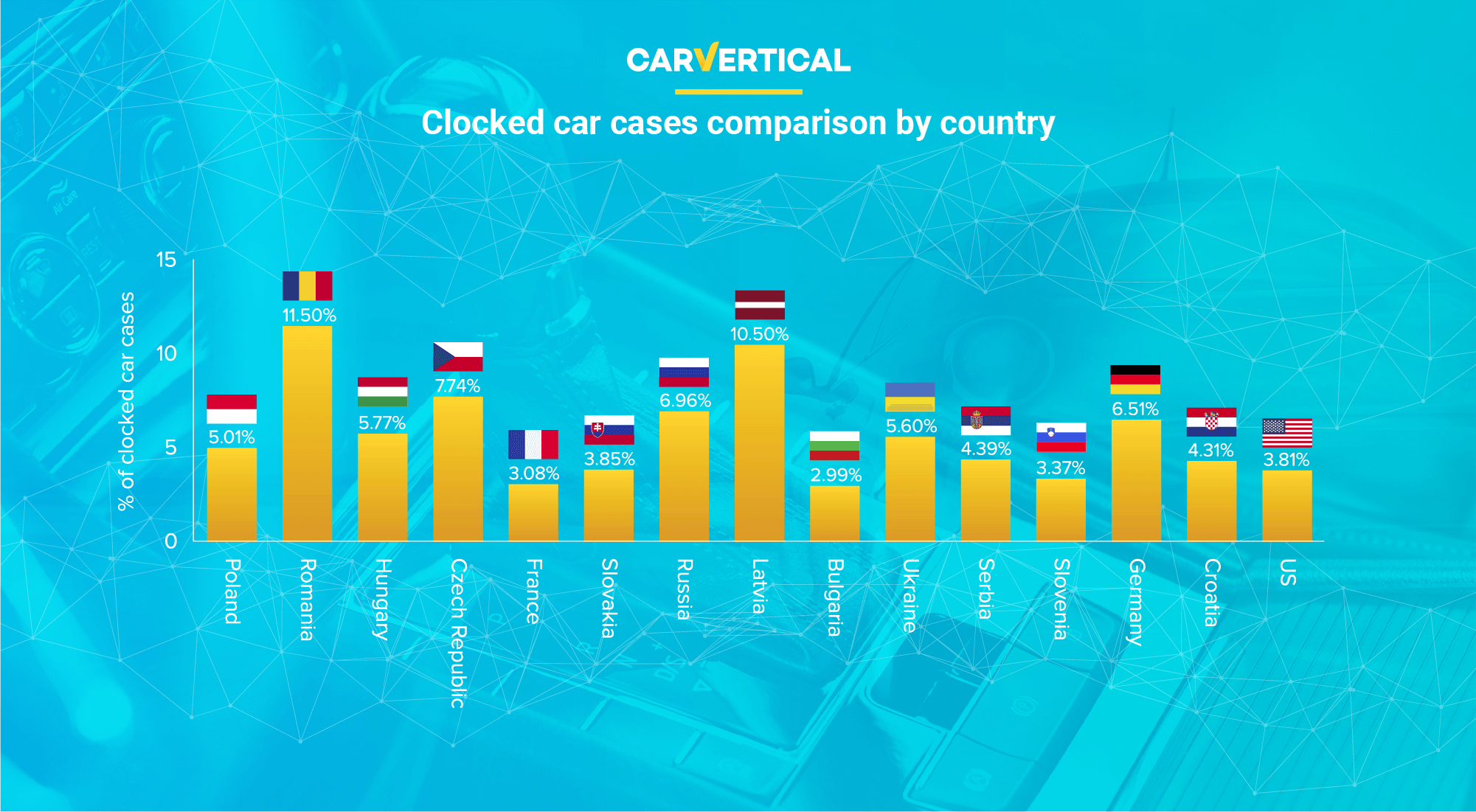 The biggest issues with visible mileage rollback are seen in the markets where used cars from Western Europe are imported. Every tenth car in Romania and Latvia is likely to have had its mileage rollbacked.

Mileage fraud affects the car market by overpricing hundreds of thousands of cars each year. This means that used car buyers are tricked into spending too much money on their car and the cash usually ends up in the black market.